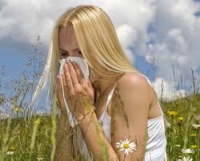 The UK has one of the highest Hay Fever rates. Last weekend, the pollen count hit 220 in some parts of England  -  a dramatic rise from its normal level of 40 or so.  For millions of Britons with hay fever this alarming spike  -  measured in grains of pollen per cubic metre of air by the Met Office  -  will have triggered sneezing fits, runny noses, sore eyes and an itchy throat
Hay Fever can last for weeks or even months without the right treatment. It can affect people's ability to drive or even sleep. Sometimes, it can be so bad, people are signed off sick from work.
Hay fever, also known as seasonal allergic rhinitis, occurs when the immune system mistakes pollen for toxins, causing the body's cells to release histamines: chemicals which inflame the lining of the nose, throat and eyes amongst other areas.
At this time of year, tree pollen is often the main culprit. From May to August, it's usually pollen from grass. In autumn, Hay Fever may be caused by late-flowering plants, nettles, mould and fungal spores. Sufferers can be sensitive to one or more of these but most are affected by grass pollen.
The amount of sunshine, rain or wind affects how much pollen plants release and how far it spreads. On rainy days, pollen may be cleared from the air, causing levels to fall, which is why there may have been a bit of light relief in midweek. On sunny days, the pollen count is highest in early evening.
There has been a large increase in allergies over the last half century. Although there is no certain cause, various theories include dietary changes, an increase in air pollutants, and over-sterilised environments which deny our immune system a chance to learn which factors are harmful or harmless.
It used to be something that mostly affected youngsters, but many more patients are developing hay fever for the first time in middle age or later, according to the National Pollen and Aerobiology Research Unit at the University of Worcester. If trends continue, some estimate there could be 32 million sufferers by 2030.
Fortunately, there is a wide range of treatment options. Speak to your pharmacist about what is available over the counter, and if these don't work for you, your doctor will be able to prescribe others.
Q. How do I know I have Hay Fever, rather than other allergies or a cold?
Rhinitis is a condition in which the inside of the nose becomes inflamed, causing sneezing, itchiness and a persistent runny nose, plus symptoms in the sinuses and eyes. It is a common condition affecting at least one in five of us, and can be caused by various allergens such as animal fur or dust. Hay Fever is rhinitis caused by pollen. It tends to be seasonal, not year-long.
It is possible to be tested for different pollen allergies to confirm the diagnosis but this is not commonly available on the NHS. Unlike a cold, with Hay Fever you never have a temperature and your nose runs clear.
Q. I look out for the pollen count but I'm not sure I understand it.
The pollen-count prediction is intended to give Hay Fever sufferers a head start to prepare for a bad day. Less than 30 is low, more than 50 is high. Most people find their Hay-Fever symptoms start at a pollen count of 50 or more, so if that is predicted it is advisable to take medication.
Q. Can I use combinations of Hay Fever treatments?
It is usually safe to combine Hay Fever treatments for the best results. For example, it is reasonable to use a steroid nasal spray with a daily antihistamine and eyedrops. Check with your GP or pharmacist, but it is not uncommon for a patient with severe hay fever to be on several treatments to control symptoms.
Q. How do I know which antihistamine treatment is best?
A once-a-day, non-drowsy tablet bought over the counter is a good place to start. Many different ones are available, such as Cetirizine or Loratadine. If they don't appear to work for you, ask your GP about prescription antihistamines or a nasal spray. You can also become tolerant to antihistamines, and after years of using one type you might find you need to switch.
Q. What if antihistamines don't work?
Steroid nasal sprays are useful for Hay Fever, if a blocked nose is your main symptom, and also if you want to avoid antihistamines because you are pregnant or breastfeeding. If you know the time of year you usually get affected, you can start with a steroid nasal spray a few weeks beforehand to reduce the severity, but you must use it every day. The sprays can cause a dry nose, nose bleeds or a dry mouth, so don't overuse them.
For Hay Fever which is so bad it is interfering with normal day-to-day life, especially around exam time, doctors will sometimes prescribe a short course of steroid tablets to dampen down the immune system.
Q. Are alternative treatments effective?
Many sufferers find acupuncture effective, and it may even resolve symptoms completely in some cases. Research is under way to evaluate this properly. Chinese Herbal remedies are probably best avoided as there is some concern that they may cause liver or kidney problems. Saltwater sprays may be useful to clean out the nose regularly to remove allergens, and can be used safely by adults and children along with conventional treatment.
Q. Is desensitisation treatment an option?
Desensitisation treatment, or immunotherapy, is useful for those with persistent symptoms especially around grass pollen. It is offered in a few NHS specialist centres and many private ones. There is a small risk of an acute reaction. You are exposed to ever larger amounts of pollen which over time reduces symptoms.
Dr Jeremy Cohen 24.04.2017

Protect yourself and your employees from Flu this year

InHouseDoctor can provide cost effective Flu vaccinations AT YOUR WORKPLACE, whether you are a large or small company. Effective protection against the Flu virus is proven to reduce absenteeism thereby increasing profitability, whilst also reducing the risk of disruption to your organization.

What makes us different from other providers is that we will provide a DOCTOR on site when the vaccinations are administered, ensuring the best possible safety for your employees. There may also be a Nurse in attendance to assist with the vaccinations if numbers require it.

Many people think Flu is a mild trivial illness, but those who have had it, will testify how serious it is and can be. In fact last winter, according to BBC sources*, 602 people died from Flu related conditions with the majority (over 70%) being in the 15 - 64 year age group (Health Protection Agency Figures)

Please contact us by email or by filling out this form, if you require further information and we will be more than happy to assist you and advise you on the best way forward

For more information about Flu and our service click here